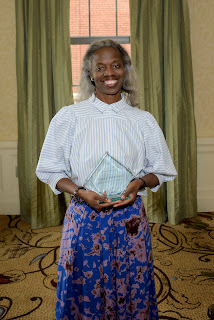 Congratulations to janera soloman, recipient of the 2018 Women of Distinction Award in the Arts & Education category!

janera solomon is the Executive Director of the Kelly Strayhorn Theater, a historic live arts venue in Pittsburgh now in its tenth year of presenting progressive, evocative, new works in dance, music, film, education, and cultural programming. Her curatorial work includes projects with some of contemporary performance’s brightest stars.

Recognized for her transformative leadership and contributions to the revitalization of East Liberty, janera managed the merger of the Kelly Strayhorn Theater and the Dance Alloy in 2011, while maintaining affordable dance instruction at The Alloy School and creating a series of diverse programs designed to inspire and engage a wide range of audiences.

An experienced arts and culture consultant, she has played a critical role in numerous cultural

projects, including the Museum of the African Diaspora in San Francisco, Brooklyn Museum of Art, the August Wilson Center in Pittsburgh and numerous others with the Toronto-based, cultural planning firm Lord Culture.

She has a passion for artists creating new work and the development of new art forms and has served as curator and advisor to a variety of artistic projects. janera maintains volunteer board positions for several organizations, including the Carnegie Museums of Pittsburgh and The Ellis School. In 2014, she formed the August Wilson Center Recovery Committee. In 2015, janera was featured in Pittsburgh Magazine as one of the “50 Most Powerful People in Pittsburgh”, and in 2018, she was awarded a “2018 Women of Influence Award” by the Pittsburgh Business Times.

Congratulations to Heather Lyke, recipient of the 2018 Women of Distinction Award in the Athletics category! 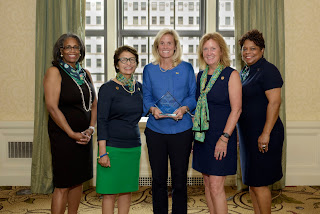 Lyke has an exemplary record of 22 years in increasingly high-level roles in collegiate athletics administration. She served as vice president and director of athletics at Eastern Michigan University since 2013. Prior to her EMU tenure, she was a ranking athletic administrator at Ohio State for 15 years and additionally held posts at the University of Cincinnati and with the NCAA.

Lyke found the beginning of her professional path during her days as a scholarship student-athlete at the University of Michigan, where she captained the Wolverines’ Big Ten champion softball team. She earned a bachelor’s degree in education from Michigan and a juris doctor from the University of Akron School of Law.

At Eastern Michigan, Lyke oversaw a department that sponsors 21 varsity sports with more than 550 student-athletes. Her tenure witnessed high levels of achievement, not only in the competitive arena but also academically and from a fundraising standpoint.

A reflection of her undergraduate studies in education, Lyke is enthusiastically dedicated to helping younger professionals in their growth and advancement. She is a frequent speaker and presenter at national conferences and serves on the board of directors of Women Leaders in College Athletics.

Born and raised in Canton, Ohio, Lyke starred at GlenOak High School in volleyball, basketball, and softball. She accepted a softball scholarship from Michigan, where she was a two-time team captain and helped Michigan to the 1992 Big Ten Championship.

Lyke and her husband, David Catalano, have three children: Elle, Sophie and Eli.

Congratulations to Sylvia Diez, recipient of the 2018 Women of Distinction Award in the Business category! 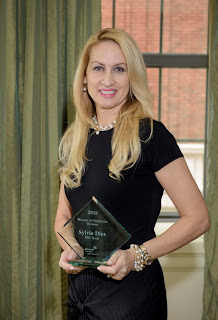 Sylvia Diez is senior vice president and regional managing director for PNC Institutional Asset Management covering the central/east region. Her primary responsibility is leading sales and client service for the region. She is also chair of the Council of National Practice Groups that include Taft-Hartley/Public Funds, Endowment & Foundation, Healthcare and Insurance within Institutional Asset Management, and leads a team of segment specialists and business development officers.

Prior to joining PNC Wealth Management in March 2001 as a relationship manager, Diez was a retirement planning specialist with CitiStreet, a member company of Citigroup. During her ten years with CitiStreet, she served in positions of increasing responsibility from account executive to a regional manager in Anaheim, California and Pittsburgh offices. She was voted by CitiStreet’s Board of Directors to receive the Director’s Trophy, which was awarded to one employee for his or her company contributions.

Diez holds a bachelor of science degree in marketing earned from Robert Morris University. Her professional licenses have included the National Association of Securities Dealers Series 7, 6, 63, 65, and 26. She has also completed Duquesne University’s Executive Certificate in Financial Planning.

Diez is a graduate of Leadership Pittsburgh XXII. She was also a corporate team member of PNC’s Grow Up Great program and a current member of PNC Women Connect EBRG, where she is the executive sponsor for the External Connections committee. Diez is a mentor in Robert Morris University Women’s Leadership and Mentorship program. She has served on several boards and has been a host committee member for many local charitable organizations, including the Muscular Dystrophy Association, Girls Scouts Western Pennsylvania, and Western PA School for the Deaf.

This is the second of four installments published in recognition of the 2018 Women of Distinction and Girl Scout honorees.