For girls in Girl Scout Troop 51514, giving back to the community is a tradition.

During the past two years, girls strived to “do a good turn daily.”
Two years ago, the troop of 20 fourth graders from Marshall Elementary School in Wexford completed nearly 1,500 good deeds. 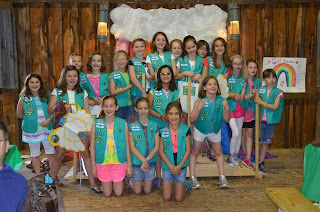 This commitment to community service was so well received by the girls and their families, troop leaders Amy Herne, Belle Zimmer and Brandy Campbell decided to up the ante.

They challenged the girls in July 2013 to work toward earning the President’s Volunteer Service Award. Zimmer began tracking all of the girls’ service hours and certifying all of the work girls did in their community. The troop logged more than 600 service hours in 11 months. In addition to troop projects, girls were encouraged to volunteer on their own and with their families.
The girls completed a variety of service projects as a troop, including:


·         helping the Pittsburgh Botanic Garden get ready for a fairy garden event by collecting items from the woods.


·         volunteering at the Marshall Township Halloween Parade and Celebration by hosting a game for local children.


Some of the efforts the girls did on their own/with their families included:


Each Girl Scout was presented a Silver Pin for her uniform and a certificate signed by President Obama at a Girl Scout ceremony in June.