It's not too late to earn funds for Girl Scouting adventures through the MagNut Program--even if you haven't started yet!
In-person ordering is coming to a close, but there's plenty of time is left to sell nuts, candy, magazines and photo keepsakes online. Online orders will be accepted through Wednesday, November 18.

Already participating? Great! Keep reaching out to friends and family both near and far to encourage them to support a girl-led business AND stock up on yummy treats, their favorite magazines, and great holiday gifts.

New to Girl Scouting or just haven't been participating in the MagNut Program? It's not too late to get started!

Check out some tips below for how to make the most of these last few weeks of the MagNut Program.

What's so special about the MagNut Program?

My Girl Scout hasn't yet participated. How do we get started?

3. Once your Girl Scout's personalized site is set up, share the link with friends and family and continue taking online orders through Nov. 18. Send 12 emails and your Girl Scout will receive a special online sales patch!

How do we promote the MagNut Program to friends and family?
The great thing about online sales is that friends and family can support your Girl Scout, no matter where they live! Here are some ways to spread the word:

1. Send emails to friends and family right from your Girl Scout's personalized sales site. As we mentioned above, if you send 12 emails through the site, your Girl Scout will receive a special online sales patch!

2. Share the link on social media. We've even created this great video that you can include that explains the MagNut Program.

3. Have customers that would like to support your Girl Scout but don't want to purchase items for themselves? Encourage them to donate to Operation: Sweet Appreciation to send cans of honey roasted peanuts to our military men and women. They can donate online at gswpa.org/military. Just be sure to tell them to include your Girl Scout's name on the "Review Your Donation" screen when donating so she and her troop gets credit. 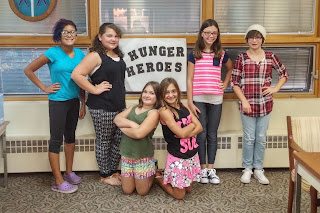 The Girl Scout Bronze Award is the highest award a Girl Scout Junior can earn. This award recognizes the girls’ leadership and planning skills that are required to follow through with a project that makes a positive difference in their community.

Girl Scout Troop 54219 of West Jefferson Hills became “Hunger Heroes” to earn this prestigious award. The girls decided to make our world a better place by making a difference in the lives of our neighbors who have a need to use the Cloverleaf Food Pantry.

Before the girls decided on a project plan they participated in activities that their leader, Darcy Vergallito, created called "Hunger 101."

The first activity was the “Food for a Week” challenge. The girls read about a fictitious family’s personal and financial situation. Then they had to figure out how much money their families had per month to spend on food, then determine a weekly food budget. Finally they had to figure out a menu and shopping list that fit that week's budget. If they did not have enough money in their budget, (which, by design, they all did not) they were shown that they could go to the Food Pantry and select items there to help make ends meet and give them enough food for that week.

Another "Hunger 101" activity was called "Food Pantry Banquet." The girls brought canned goods to the meeting not knowing that they would be cooking their own dinner. The girls created a full meal using only foods that would be available at a typical food pantry. Their menu included chicken pot pie, scalloped corn and for dessert a cinnamon crunch cake! The girls were pleasantly surprised with the outcome of the dishes!

Next the girls took a tour of the Cloverleaf Food Pantry to see how it operates. On their tour they learned that there are several items that the Food Pantry consistently needs. That sparked the girls to host their "Most Wanted Items Food Drive."

The girls hosted the week-long food drive at the South Hills IGA from Monday, May 11 through Sunday, May 17. The girls had a food donation box located at the front cash registers for customers to donate these much needed items. The drive was a huge success; the girls collected over 10 overflowing bags of grocery items!

The girls not only personally brought in their donations, they also volunteered their time and worked the food pantry alongside the regular volunteers over the summer. The girls helped by sorting the items and stocking them on their shelves.

The final step for the girls to earn their Bronze Award is to make this project sustainable. The girls want to be sure that the Cloverleaf Food Pantry will continue to receive support and help from local Girl Scouts. 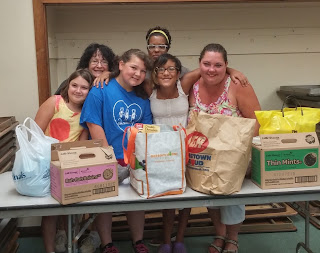 They would like the troops to agree to do something to help the Cloverleaf Food Pantry. What they decide to do is up to the individual troops but the Scouts of 54219 know that they will love how it feels to be a “Hunger Hero,” too!

Earning the Bronze Award is something that each girl from Girl Scout Troop 50428 will never forget.

And the winner is...

Congratulations to Dottie Neal, the lucky winner of two tickets to see the Pittsburgh Penguins face-off against the Minnesota Wild on November 17!

Dottie's name was randomly drawn from all registered attendees of the Kick-Off Celebrations throughout our council. Dottie attended the Kick-Off at Camp Conshatawba.

Have fun at the game!