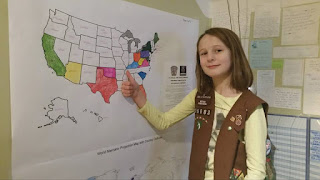 Since 2014, Greensburg Girl Scout Emily Ruggieri has led an effort to deliver Girl Scout Cookies to patients, family and staff at Children's Hospital of Pittsburgh of UPMC.

She started the program in memory of her late father, Ethan Milliron, who received care there while battling bone cancer.

Milliron died when Emily was only 18 months old.

Over the past three years, Emily and her network of supporters have collected donations to send 17,000 boxes to the hospital.

Emily’s parents Suzanne and John Ruggieri coordinated a social media campaign to help the girls cast a wider net for donations to the program, which is named GSCOOKIES4CHP.

Donations for the Girl Scout Cookies rolled in from all 50 states and from countries around the globe. Emily enjoyed tracking all the locations that donated on a large map on the wall in the Ruggieri’s home.

Gina Cassidy, from Bedford, New Hampshire, heard about Emily through a friend in Florida.

“My friend knew that Emily was looking for someone from New Hampshire to donate,” she said. “He tagged me in a Facebook post from Emily’s mother and I thought it was great, so I donated!"

A former Girl Scout leader, Cassidy was happy to see Girl Scouts working together to make a difference. “I never met Emily, but hearing how she wanted to bring joy to sick children in memory of her dad was without a doubt a great cause.”

Australian Lisa O’Malley also heard about GSCOOKIES4CHP through a friend on Facebook and decided to put her country on the map of locations that had donated to the cause.

“I thought Emily was very brave and her story so inspiring,” said O’Malley. “She turned what was a very personal loss into a positive and put her energy in to trying to help others. I am very proud of her.”

For Emily’s mother, Suzanne, GSCOOKIES4CHP not only benefits the patients at the hospital, but also helps the girls learn skills and meet new people. “Girls met other Girl Scouts, they made friends, shared in a common goal, learned about philanthropy and public speaking,” she said.


Take action projects like GSCOOKIES4CHP highlight what Girl Scouting is all about—building girls of courage, confidence and character who make the world a better place.